Thing you need to know about BROWN HARES - EUROPEAN HARES

ADD YOUR CLASSIFIED ADS ON PRICE-NICE

Added 1 week ago by admin
0 Views
Brown hares are also known as European hares and are widespread across Europe and some parts of Asia. Surprisingly, despite how widespread they are in Britain, they are not a native species and were introduced at some point during the iron age. Since then they have also been introduced to other countries, including northern Ireland and Australia in the 19th century.
Brown hares are much larger than rabbits, with longer pointed ears that have noticeable black tips to them. They have long powerful legs and a short tail that is white underneath and black on top.
Hares are found in a variety of lowland habitats but are most numerous around open farmland, meadows and along deciduous woodland edges. Unlike rabbits hares do not dig burrows but instead create a depression in the ground where they spend most of the daylight hours. This is known as a form and without the protection of a burrow, can make the hares very vulnerable to predators. To combat this, the hares remain very still and silent, hoping to go un-noticed but if they feel any threat is too great, they can run, really fast. In fact, they are the fastest land mammal in the UK and the 9th fastest on the planet. For short periods they can reach speeds of up to 50 miles per hour.
Hares are most active after dark and in the early morning and late evening when they venture away from their forms in search of food. This includes grains, grasses, cereals and sometimes they will strip bark and vegetation from the low hanging branches of trees. These foods are difficult to digest and if you have seen my video about European rabbits you might be familiar with the term, coprophagy. This is where an animal eats its own faeces in order to re-digest it and Hares are part of this poo eating club.
One of the hares most famous traits is their tendency to stand up on their back legs and box one another. Male hares are called bucks and initially people thought this fighting was between them in the attempt to win the right to mate, but it is most often between a female which is known as a doe and a buck that is being too persistent. Throughout the spring and summer the bucks trail the does around, hoping they we be willing to mate, this can often end up with one doe leading a trail of 3 or four bucks. Once she has picked a mate the doe is pregnant for 41 to 42 days before giving birth to between 2 and 4 young which are known as leverets. These are born with a full coat of fur and with their eyes open. Their mother leaves them in a form close to where they are born and only returns once a night to feed them. This avoids attracting any predators as when the leverets are young they are very vulnerable. Gradually the leverets start to venture further from their forms and after around 4 weeks their mother stops returning to feed them and they are left to fend for themselves. Although this lack of parental care may be a bit surprising from a mammal, it does allow each doe to breed multiple times in a season, sometimes producing as many as 4 litters between February and September.
The biggest predator for young hares is red foxes but aside from hunting by people and idiots with dogs, adult hares in the UK are pretty safe. Because of this their population has stayed pretty steady over the past 25 years and there are somewhere in the region of 580,000 hares in the United kingdom. Their average lifespan is 3 to four years but on rare occasions they can live much longer, the oldest on record making it to 12 and half years of age.
#brownhare #nature #wildlife

Thing you need to know about BROWN HARES - EUROPEAN HARES 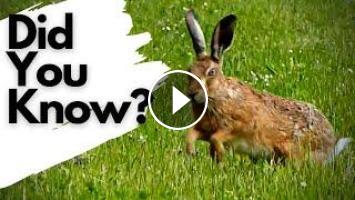 Brown hares are also known as European hares and are widespread across Europe and some parts of Asia. Surprisingly, despite how widespread they are in...